Join the Federation (or not): the World of Star Trek Costuming

Yes, Star Wars has had Disney advertising it really heavily, but people still have not forgotten about Star Trek. In fact, Star Trek costumes are a well-loved option perfect for newcomers to costuming but still with room for expansion for those looking for a challenge. There are typically four main groups recognized by most people familiar with Star Trek: Star Fleet, the Ferengi, the Klingons, and the Orion Slave Girls. No, the last one isn't some sort of kinky thing. More on that later.

Most of Star Trek's cast is made up of humanoid creatures in simple but colorful Star Fleet uniforms. There are no giant wings to construct or huge swords for people to trip over. Space won't be an issue! This is true for all of the groups mentioned. Some costumes are hotter, heavier, harder to don, harder to portray, and harder to care for than others, though. 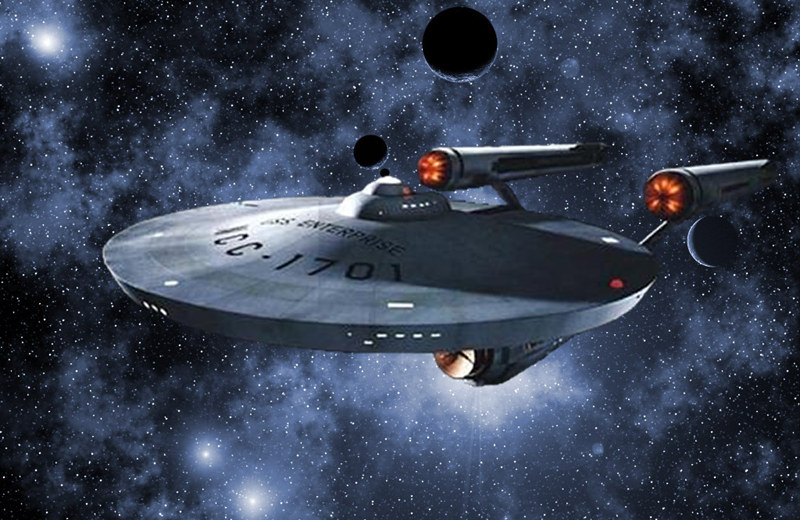 Star Fleet costumes are typically just a uniform worn by someone who is clean-cut and freshly washed. This costume is very easy to get into and get out of and very simple to portray. Shoot for "upstanding guy/gal" and you're good enough! Star Fleet uniforms typically can just be thrown into the wash for easy care. Many of the premade uniforms are made of synthetic materials. A party or goofing off with friends won't be a problem, though it might be a little hot in a crowded space. Thankfully, there are dozens of patterns available for making your own Star Fleet uniform from breathable cotton. Most of them require only basic sewing skills. If you can make a shirt, you can make a Star Fleet uniform.

Patches, badges and other pre-made gear can be added to home made shirts and trousers for an authentic look on any Star Fleet uniform. Be sure to pair it with freshly shined black shoes. From there you are done! Members of Star Fleet come from all races and all worlds so anything else you add is entirely up to you. Adding pointed ears painted to match your skin tone and thicker eyebrows to become a Star Fleet Vulcan is a popular more advanced option.

The other groups like Klingons and Ferenghi may require special cleaning or the removal of ornaments before laundering. They also are more difficult to make, wear and portray. From easiest to hardest we have Ferengi, Orion Slave Girl, and Klingon.

The Ferenghi look difficult, but generally aren't. Their large head prosthetic actually is open in the back. The decorative veil around the back of the head allows the scalp to breathe so it's not too hot. If your hair is longer you will need a wig cap to reign things in. Also sure to match prosthetic and skin tones or it will look fake. If the skin is far off from the prosthetic, paint your skin. If the prosthetic is near your skin color, paint the prosthetic and blend the edges with makeup instead. Ferenghi costumes can sometimes be found premade, but not always. Creating one out of a grey shirt and pants combo with a fake fur toga and fake fur boot coverings isn't hard. It is, however, fairly hot to wear and best suited to cooler events. There is also a fancier version with glittery black fabric on a grey suit. This will take some intermediate sewing skill, especially for the neck ornament. This version is generally cooler and more comfortable. Optional fake teeth and blue nail polish complete the outfit. To portray a Ferenghi simply do everything with an eye towards furthering yourself. For example, be friendly because it's good for business, not because you want friends. Stay sharp and be especially wary of other Ferenghi.

The Orion Slave Girls are a bit of a misnomer. Although the name sounds like they are a subservient race of all females, there actually are males of this race and the males can be subservient to the very aggressive females. The females know what they want and will do whatever it takes to get it even if it means pretending to be coy and graceful. This costume is simple to wear but hard to pull off. If you aren't the athletic type, just skip it. Most people wouldn't recognize a male Orion, so we'll stick with the females here. Select a full body green spandex suit that goes up to your neck. This preserves modesty and prevents hours of body paint. Pick one that is form-fitting and of a darker "forest" green. Paint your face to match and add a long, wavy black wig. From there top it with your choice of bikini and loincloth in any colors you wish and add matching sandals. Jewelry with smooth edges may be added but be careful that it does not nick the body suit. Yes, skinny boys, you can be a "Slave girl" if you want! Tuck yourself in tightly, shave, and add false breasts under your body suit. The rest is just the same as if you were female. The Orion Slave Girls are graceful yet aggressive with dance-like movements. Don't talk; just listen, move, and react. The mystery should add to the appeal. Even though the costume isn't hard (if you have the body for it), Orion Slave Girls are hard to portray. Practice at home before attempting in public.

The Klinglons typically have it hotter and trickier than all of the rest. A good Klingon is considered the "Holy Grail" among Star Trek costumes due to it's difficulty. Premade Klingon costumes using Search For Spock era or later designs are notorious for being hot and cheesy. This is because many of them use rubber and faux fur for that "armor" look coupled with cheap fabric to keep the price down. Thankfully many Klingon fan clubs will help cosplayers construct their own uniforms out of lighter, more breathable fabrics that don't look like they were fished out of a bargain bin. The hot forehead piece and heavy wig are unavoidable, but using an airbrush to apply paint instead of smearing on greasepaint will help a lot. If you are darker skinned with long dark hair being a Klingon will be easier for you than for everyone else. All you will need is your own natural hair, the headpiece, and a uniform. Simply paint the headpiece to match your skin then blend in any seams with makeup. Opting to be a 1960's era Klingon is an easier, less hot path, but be aware that not everyone will know you're a Klingon. Hey, they tricked Kirk enough times. What chance does a random congoer have?

Portraying a Klingon requires remaining very disciplined and martial at all times. Learning a few words in Klingon and picking up a more guttural tone to your voice if male or a more nasal tone if female can help. Take up space when you move and be bold. You're a warrior! Fellow Klingons are your friends. If you find some, even if you have never met before, be friendly. Who knows, you could be real friends by the end.

As you can see Star Trek costuming offers many options for all skill levels. The costumes are compact, comfortable, and simple to wear with recognizable factions people know and love. All of this is why Star Trek costuming continues to endure even to this day.